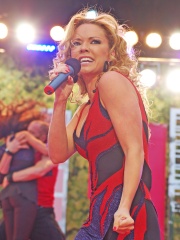 Anna Cecilia Sahlin (born 11 May 1976), known professionally as Anna Sahlene and formerly by the one-word stage name Sahlene, is a Swedish performer best known as a singer: she placed third at the Eurovision Song Contest 2002 with "Runaway" the Estonian Eurovision entrant for 2002. Read more on Wikipedia

Since 2007, the English Wikipedia page of Sahlene has received more than 41,689 page views. Her biography is available in 20 different languages on Wikipedia making her the 2,063rd most popular singer.

Page views of Sahlenes by language

Among singers, Sahlene ranks 2,073 out of 3,001. Before her are Dahyun, Joey Yung, Anohni, Ronnie Milsap, Giusy Ferreri, and Nadia Ali. After her are Lúcia Moniz, Kalomira, Sibel Tüzün, Ella Henderson, Ronnie Carroll, and Diana Gurtskaya.