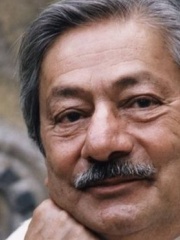 Saeed Jaffrey (8 January 1929 – 15 November 2015) was an Indian-British actor whose versatility and fluency in multiple languages allowed him to straddle radio, stage, television and film in a career that spanned over six decades and more than a hundred and fifty British, American, and Indian movies.He was able to breathe life into the smallest of roles through intense preparation and a nuanced performance, like that of the interpreter and guide Billy Fish in The Man Who Would Be King (1975), an act that brought him international attention. His seductive, resonant voice combined with a gift for mimicry and a sharp ear for accents made him the natural choice as narrator for audio books. His narration of the Kama Sutra titled The Art of Love (1996) was listed by Time magazine as "one of the five best spoken word records ever made". Read more on Wikipedia

Since 2007, the English Wikipedia page of Saeed Jaffrey has received more than 2,237,777 page views. His biography is available in 21 different languages on Wikipedia making him the 5,014th most popular actor.