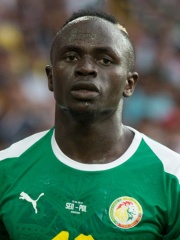 Sadio Mané (born 10 April 1992) is a Senegalese professional footballer who plays as a winger for Premier League club Liverpool and the Senegal national team. Mané finished fourth for the 2019 Ballon d'Or, and in the award for the Best FIFA Men's Player he ranked fifth in 2019 and fourth in 2020.Mané began his professional career with Ligue 2 club Metz at age 19, but he departed after a solitary season to join Austrian club Red Bull Salzburg in 2012 for a fee of €4 million, winning a league and cup domestic double in the 2013–14 season. Later that summer, Mané transferred to English club Southampton for a club record fee of £11.8 million. Read more on Wikipedia