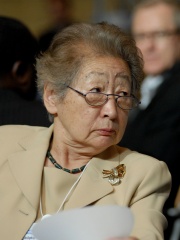 Sadako Ogata, (née Nakamura (緒方 貞子, Ogata Sadako, 16 September 1927 – 22 October 2019), was a Japanese academic, diplomat, author, administrator, and professor emeritus at the Roman Catholic Sophia University. She was widely known as the head of the office of the United Nations High Commissioner for Refugees (UNHCR) from 1991 to 2000, as well as in her capacities as Chair of the UNICEF Executive Board from 1978 to 1979 and as President of the Japan International Cooperation Agency (JICA) from 2003 to 2012. Read more on Wikipedia

Since 2007, the English Wikipedia page of Sadako Ogata has received more than 104,924 page views. Her biography is available in 25 different languages on Wikipedia making her the 9,597th most popular politician.