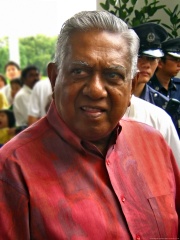 Sellapan Ramanathan ( ; 3 July 1924 – 22 August 2016), usually referred to as S. R. Nathan, was a Singaporean politician who was the sixth President of Singapore & the commander-in-chief of the Singapore Armed Forces from 1999 to 2011, having been elected in uncontested elections in 1999 and 2005 when former president Ong Teng Cheong stepped down from the position. In 2009, he surpassed Benjamin Sheares to become Singapore's longest-serving President. Read more on Wikipedia

Since 2007, the English Wikipedia page of S. R. Nathan has received more than 538,038 page views. His biography is available in 42 different languages on Wikipedia making him the 7,581st most popular politician.

Among politicians, S. R. Nathan ranks 7,548 out of 14,801. Before him are Sher Ali Khan, George Victor, Prince of Waldeck and Pyrmont, Ramzan Kadyrov, Goh Kun, Nebojša Radmanović, and Şehsuvar Sultan. After him are Aeropus I of Macedon, John of Nikiû, Edmund Veesenmayer, Lucius Julius Caesar, Gero, and Hugh X of Lusignan.