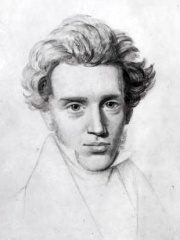 Søren Aabye Kierkegaard ( SORR-ən KEER-kə-gard, also US: -⁠gor; Danish: [ˈsœːɐn ˈkʰiɐ̯kəˌkɒˀ] (listen); 5 May 1813 – 11 November 1855) was a Danish philosopher, theologian, poet, social critic, and religious author who is widely considered to be the first existentialist philosopher. He wrote critical texts on organized religion, Christendom, morality, ethics, psychology, and the philosophy of religion, displaying a fondness for metaphor, irony, and parables. Much of his philosophical work deals with the issues of how one lives as a "single individual", giving priority to concrete human reality over abstract thinking and highlighting the importance of personal choice and commitment. Read more on Wikipedia

Søren Kierkegaard is most famous for his philosophy of existentialism.

Among philosophers, Søren Kierkegaard ranks 34 out of 1,089. Before him are Averroes, Democritus, Diogenes, David Hume, Laozi, and Martin Heidegger. After him are Auguste Comte, Sun Tzu, Plutarch, Al-Ghazali, Michel de Montaigne, and Ludwig Wittgenstein.

Among PHILOSOPHERS In Denmark

Among philosophers born in Denmark, Søren Kierkegaard ranks 1. After him are Harald Høffding (1843).