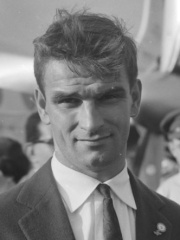 Sándor Péter Kocsis (SHAWN-dor KOTCH-ish; Hungarian: [ˈʃaːndor ˈpeːtɛr ˈkot͡ʃiʃ]; 21 September 1929 – 22 July 1979) was a Hungarian footballer who played for Ferencváros TC, Budapest Honvéd, Young Fellows Zürich, FC Barcelona and Hungary as a striker. During the 1950s, along with Ferenc Puskás, Zoltán Czibor, József Bozsik and Nándor Hidegkuti, he was a member of the Mighty Magyars. Read more on Wikipedia

Sándor Kocsis is most famous for being the youngest member of the Golden Team, which was the Hungarian national team that won the gold medal at the 1952 Summer Olympics.

Among soccer players, Sándor Kocsis ranks 26 out of 16,923. Before him are Luis Suárez, Mário Zagallo, Josef Bican, Cristiano Ronaldo, Raymond Kopa, and László Kubala. After him are Sócrates, Ronaldo, Vavá, Gunnar Nordahl, Francisco Gento, and Rivellino.

Among SOCCER PLAYERS In Hungary