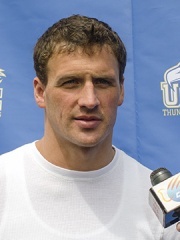 Ryan Steven Lochte ( LOK-tee; born August 3, 1984) is an American competitive swimmer and 12-time Olympic medalist. Along with Natalie Coughlin, Dara Torres, and Jenny Thompson, he is the second-most decorated swimmer in Olympic history measured by total number of medals, behind only Michael Phelps. Lochte's seven individual Olympic medals rank second in history in men's swimming (again to Michael Phelps), tied for second among all Olympic swimmers. Read more on Wikipedia

Yahoo Entertainment
The Rush: Ryan Lochte on the intense pressure of the Olympics
12-time Olympic medalist Ryan Lochte joined The Rush to talk about a potential comeback, the intense scrutiny of social media and the Olympics and why he loves his fans.
Yahoo Sports Videos