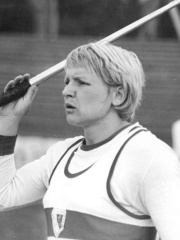 Ruth Fuchs (née Gamm, later Hellmann, born 14 December 1946 in Egeln, Saxony-Anhalt) is a German politician and former athlete. Fuchs, representing East Germany, was the winner of the women's javelin at the 1972 (Munich) and 1976 (Montreal) Olympic Games. Read more on Wikipedia

Since 2007, the English Wikipedia page of Ruth Fuchs has received more than 21,721 page views. Her biography is available in 24 different languages on Wikipedia making her the 9,998th most popular politician.

Among politicians, Ruth Fuchs ranks 9,948 out of 14,801. Before her are Mari Alkatiri, Cuthbert Sebastian, Henri Druey, Burnaburiash I, Sa'dun Hammadi, and Tzannis Tzannetakis. After her are Marduk-zakir-shumi II, Mithridates I of the Bosporus, Ernst Wilhelm Bohle, Ghazi Muhammad, Julia Livia, and Konstantinos Paspatis.