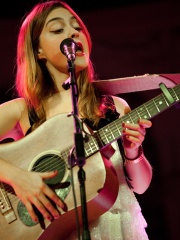 Lourdes Hernández González, known professionally as Russian Red, is a Spanish indie and folk singer-songwriter.Known by many as the "Spanish Feist", in reference to the Canadian singer-songwriter who inspires her in many of her attitudes on the microphone, Hernández—who writes and sings all of her compositions in English—states that she sings in that language instinctively because she has always listened to music in English. Read more on Wikipedia

Since 2007, the English Wikipedia page of Russian Red has received more than 122,865 page views. Her biography is available in 15 different languages on Wikipedia making her the 2,452nd most popular singer.

Among singers, Russian Red ranks 2,466 out of 3,001. Before her are Example, Too Short, Guy Sebastian, Marta Roure, Nam Woo-hyun, and Pablo Ruiz. After her are Monika Kuszyńska, Sandra Oxenryd, Freddie, Lucía Pérez, Marlayne, and Samuel.