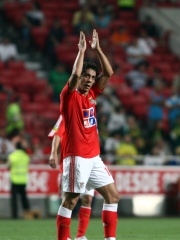 Rui Manuel César Costa OIH (Portuguese pronunciation: [ʁuj ˈkɔʃtɐ]; born 29 March 1972) is a Portuguese former professional footballer who currently is interim president of S.L. Benfica and its SAD, replacing Luís Filipe Vieira.Regarded as one of the best midfielders in world football and one of Portugal's best players in recent history, Costa usually played as an attacking midfielder and was particular known for his excellent technique, playmaking ability, and eye for goal from midfield. In 2004, he was named by Pelé in the FIFA 100 as one of the 125 greatest living football players.Nicknamed "The Maestro" and “Il Musagete”, Costa spent the majority of his career with Benfica in Portugal and Fiorentina and AC Milan in Italy. In a top-flight career spanning 17 years, he won several trophies, including one Primeira Liga title, one Taça de Portugal, one Serie A title, three Coppa Italia, one UEFA Champions League and one UEFA Super Cup. Read more on Wikipedia