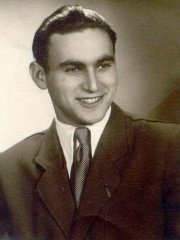 Rudolf "Rudi" Vrba (born Walter Rosenberg; 11 September 1924 – 27 March 2006) was a Slovak-Jewish biochemist who, as a teenager in 1942, was deported to the Auschwitz concentration camp in German-occupied Poland. He became known for having escaped from the camp in April 1944, at the height of the Holocaust, and for having co-written a detailed report about the mass murder that was taking place there. Distribution of the report by George Mantello in Switzerland is credited with having halted the mass deportation of Hungary's Jews to Auschwitz in July 1944, saving more than 200,000 lives. Read more on Wikipedia

Among BIOLOGISTS In Slovakia

Among biologists born in Slovakia, Rudolf Vrba ranks 2. Before him are Stephan Endlicher (1804). After him are Joseph Franz von Jacquin (1766) and Günther Beck von Mannagetta und Lerchenau (1856).