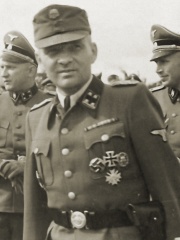 Rudolf Franz Ferdinand Höss (also Höß, Hoeß, or Hoess; 25 November 1901 – 16 April 1947) was a German SS officer during the Nazi era who, after the defeat of Nazi Germany, was convicted for war crimes. Höss was the longest-serving commandant of Auschwitz concentration and extermination camp (from 4 May 1940 to November 1943, and again from 8 May 1944 to 18 January 1945). He tested and implemented means to accelerate Hitler's order to systematically exterminate the Jewish population of Nazi-occupied Europe, known as the Final Solution. Read more on Wikipedia

Rudolf Höss was a high-ranking Nazi SS officer who served as the commandant of Auschwitz concentration camp in German-occupied Poland during World War II. He was arrested by British forces in 1946, and was tried in 1947 in Poland for war crimes, sentenced to death, and executed by hanging on April 16, 1947.

Among politicians, Rudolf Höss ranks 469 out of 15,710. Before him are Shivaji, Emperor Taizong of Tang, Albert II of Germany, Alexander Lukashenko, Atahualpa, and Gaiseric. After him are Severus Alexander, Shah Jahan, George I of Greece, Margaret I of Denmark, Yazid I, and Constantine II of Greece.