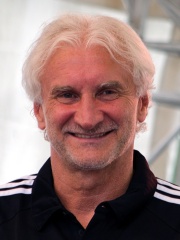 Rudolf "Rudi" Völler (pronounced [ˈfœlɐ]; born 13 April 1960), nicknamed "Tante Käthe" ("Aunt Käthe"), is a German former professional football player and manager who serves as the sporting director for Bayer Leverkusen. A forward, Völler won the FIFA World Cup in 1990 as a player. He also scored an equalizing goal to make it 2–2 in the 81st minute of the 1986 FIFA World Cup Final vs Argentina, but it ended up with a 3–2 victory for Argentina. Read more on Wikipedia

Since 2007, the English Wikipedia page of Rudi Völler has received more than 689,728 page views. His biography is available in 52 different languages on Wikipedia making him the 155th most popular soccer player.