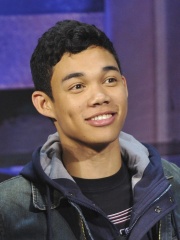 Roshon Bernard Fegan (born October 6, 1991), mononymously known as Roshon (stylized as ROSHON, formerly stylized as RO SHON), is an American actor, rapper, and dancer. He is best known for his role as Ty Blue on the Disney Channel original series Shake It Up and for his role as Sander Loyer in the Disney Channel movie franchise Camp Rock with the Jonas Brothers and Demi Lovato. He writes and produces his own music as well as working with the president of Lava/Universal Republic. Read more on Wikipedia

Since 2007, the English Wikipedia page of Roshon Fegan has received more than 773,255 page views. His biography is available in 23 different languages on Wikipedia making him the 8,635th most popular actor.