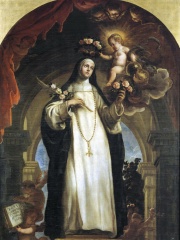 Rose of Lima (30 April 1586 – 24 August 1617) was a member of the Third Order of Saint Dominic in Lima, Peru, who became known for both her life of severe asceticism and her care of the needy of the city through her own private efforts. A lay member of the Dominican Order, she was declared a saint by the Catholic Church, being the first person born in the Americas to be canonized as such.As a saint, Rose of Lima has been designated as a co-patroness of the Philippines along with Saint Pudentiana; both saints were moved to second-class patronage in September 1942 by Pope Pius XII, but Rose remains the primary patroness of Peru and of the local people of Latin America. Read more on Wikipedia

Since 2007, the English Wikipedia page of Rose of Lima has received more than 719,424 page views. Her biography is available in 42 different languages on Wikipedia making her the 418th most popular religious figure.

Page views of Rose of Limas by language

Among religious figures, Rose of Lima ranks 418 out of 2,001. Before her are Pope Eleutherius, Simon Magus, Abu Hurairah, William Laud, Pancras of Rome, and Bruno of Cologne. After her are Pope John XI, Muhammad al-Baqir, Abd Allah ibn Abbas, Pope Agapetus I, Pope Soter, and Salome.

Among RELIGIOUS FIGURES In Peru