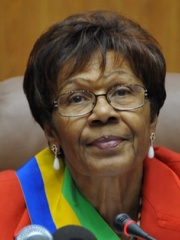 Rose Francine Rogombé (née Etomba) (20 September 1942 – 10 April 2015) was a Gabonese politician who was Acting President of Gabon from June 2009 to October 2009, following the death of long-time President Omar Bongo. She constitutionally succeeded Bongo due to her role as President of the Senate, a post to which she was elected in February 2009. She was a lawyer by profession and a member of the Gabonese Democratic Party (PDG). Read more on Wikipedia

Since 2007, the English Wikipedia page of Rose Francine Rogombé has received more than 59,527 page views. Her biography is available in 28 different languages on Wikipedia making her the 8,720th most popular politician.

Among politicians, Rose Francine Rogombé ranks 8,685 out of 14,801. Before her are Yegor Ligachyov, Milton George Henschel, Jayavarman VIII, Sauromaces I of Iberia, Marcantonio Trivisan, and Shaul Mofaz. After her are Daniel arap Moi, Giovanni Passannante, Farrukhsiyar, Bjarni Benediktsson, Nicolás Bravo, and Maria Komnene, Queen of Hungary.