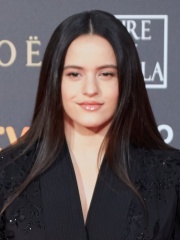 Rosalía Vila Tobella (born 25 September 1992), known mononymously as Rosalía (Spanish: [rosaˈlia] or Catalan: [ruzə'liə]; stylised in all caps), is a Spanish singer and songwriter. After discovering Spanish folkloric music at an early age, Rosalía graduated Catalonia College of Music with honors by virtue of her collaborative cover record with Raül Refree, Los Ángeles (2017) and the baccalaureate project El Mal Querer (Sony, 2018), which was co-produced by El Guincho on a low budget and contained modern interpretations of flamenco mixed with pop and urban. The album, which won the Latin Grammy Award for Album of the Year and was listed in Rolling Stone's 500 Greatest Albums of All Time, was released to critical acclaim and started the ascent of Rosalía into the international music scene.Her first hit single came in 2019, when she collaborated with J Balvin on "Con Altura", a reggaeton-inspired track that marked Rosalía's journey to urban music. Read more on Wikipedia

Page views of Rosalías by language