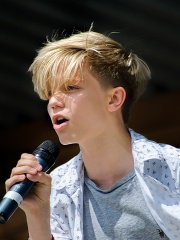 Ronan Parke (born 8 August 1998) is an English singer from Poringland, Norfolk, UK who came runner-up in the fifth series of ITV show Britain's Got Talent in 2011 when he was 12 despite being the bookies' favourite to win. Since appearing on the show, he had signed a joint record deal with Sony Music and released a charted self-titled debut album Ronan Parke on 24 October 2011 which reached 22 on the Official Chart. He has also released a number of singles, including a Christmas single in 2012 and a charity single "Defined" in 2013 with the anti bullying organisation Kidscape. Read more on Wikipedia