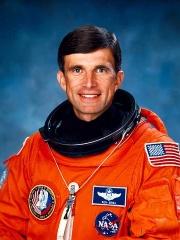 Ronald "Ron" Michael Sega (also Ronald Šega) (Ph.D.) (born December 4, 1952) is professor of systems engineering and Vice President for Energy and the Environment at the Colorado State University Research Foundation, a non-profit advocacy organization supporting CSU. He is also the Vice President and Enterprise Executive for Energy and Environment at The Ohio State University. From August 2005 to August 2007, he served as Under Secretary of the Air Force. He is a retired Major General in the United States Air Force and a former NASA astronaut. Read more on Wikipedia

Since 2007, the English Wikipedia page of Ronald M. Sega has received more than 33,098 page views. His biography is available in 15 different languages on Wikipedia making him the 412th most popular astronaut.