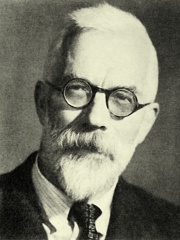 Sir Ronald Aylmer Fisher (17 February 1890 – 29 July 1962) was a British polymath, mathematician, statistician, geneticist, and academic. For his work in statistics, he has been described as "a genius who almost single-handedly created the foundations for modern statistical science" and "the single most important figure in 20th century statistics". In genetics, his work used mathematics to combine Mendelian genetics and natural selection; this contributed to the revival of Darwinism in the early 20th-century revision of the theory of evolution known as the modern synthesis. Read more on Wikipedia

Ronald Fisher is most famous for his work in population genetics. He is also known for his work in the field of statistics, and for his contributions to the design of experiments.

Among statisticians, Ronald Fisher ranks 5 out of 9. Before him are Francis Galton, Thomas Bayes, Pafnuty Chebyshev, and Karl Pearson. After him are Jerzy Neyman, C. R. Rao, Joseph Kruskal, and Gertrude Mary Cox.

Most Popular Statisticians in Wikipedia

Among STATISTICIANS In United Kingdom