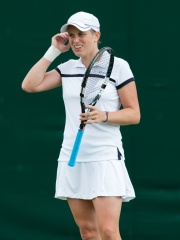 Romina Sarina Oprandi (born 29 March 1986) is a former tennis player. She has dual Swiss-Italian citizenship and represented Italy from her professional debut in 2005 until January 2012, when she joined the Swiss tennis federation.She has won 26 singles titles and 11 doubles titles on the ITF Women's Circuit, and also one doubles title on the WTA Tour. On 10 June 2013, she achieved her career-high singles ranking of world No. Read more on Wikipedia

Since 2007, the English Wikipedia page of Romina Oprandi has received more than 31,069 page views. Her biography is available in 19 different languages on Wikipedia making her the 724th most popular tennis player.

Among TENNIS PLAYERS In Switzerland