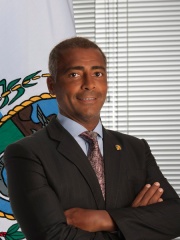 Romário de Souza Faria (born 29 January 1966), known simply as Romário (Brazilian Portuguese: [ʁoˈmaɾiu]), is a Brazilian politician who previously achieved worldwide fame as a professional footballer. A prolific striker renowned for his clinical finishing, he scored over 750 goals and was the first player to score at least 100 goals for three different clubs. He is considered one of the greatest players of all time. Read more on Wikipedia

Romário is most famous for being a Brazilian footballer who played for clubs like Flamengo, Vasco da Gama, and PSV Eindhoven.

Page views of Romários by language