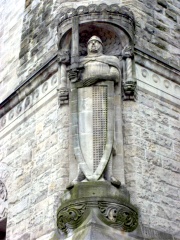 Roland (pronounced [ʁɔ.lɑ̃]; Old Frankish: *Hrōþiland; Medieval Latin: Hruodlandus or Rotholandus; Italian: Orlando or Rolando; died 15 August 778) was a Frankish military leader under Charlemagne who became one of the principal figures in the literary cycle known as the Matter of France. The historical Roland was military governor of the Breton March, responsible for defending Francia's frontier against the Bretons. Read more on Wikipedia

Since 2007, the English Wikipedia page of Roland has received more than 786,244 page views. His biography is available in 49 different languages on Wikipedia making him the 30th most popular military personnel.

Page views of Rolands by language

Among military personnels, Roland ranks 30 out of 1,194. Before him are Pyrrhus of Epirus, Horatio Nelson, 1st Viscount Nelson, Ptolemy I Soter, Vercingetorix, Simo Häyhä, and Guan Yu. After him are Baron Munchausen, Jochi, Ratko Mladić, Douglas MacArthur, Charles XIV John of Sweden, and Flavius Aetius.

Among MILITARY PERSONNELS In Spain