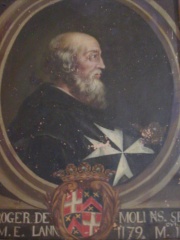 Among people born in 1200, Roger de Moulins ranks 35. Before him are Kaliman Asen II of Bulgaria, Anonymus, Irene Laskarina, Isabella, Countess of Gloucester, Peire de Montagut, and Alix, Duchess of Brittany. After him are Thomas of Britain, Pribislav of Mecklenburg, Gebre Mesqel Lalibela, Lembitu, Matthew Paris, and Marco I Sanudo. Among people deceased in 1187, Roger de Moulins ranks 8. Before him are Pope Urban III, Raynald of Châtillon, Raymond III, Count of Tripoli, Emperor Gaozong of Song, Gerard of Cremona, and Constantine Manasses. After him is Ruben III, Prince of Armenia.