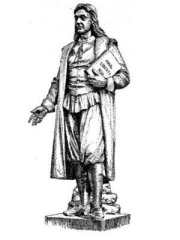 Roger Williams (c. 21 December 1603 – between 27 January and 15 March 1683) was a Puritan minister, theologian, and author who founded Providence Plantations, which became the Colony of Rhode Island. He was a staunch advocate for religious freedom, separation of church and state, and fair dealings with American Indians, and he was one of the first abolitionists.Williams was expelled by the Puritan leaders from the Massachusetts Bay Colony for spreading "new and dangerous ideas", and he established the Providence Plantations in 1636 as a refuge offering what he called "liberty of conscience". Read more on Wikipedia

Since 2007, the English Wikipedia page of Roger Williams has received more than 1,118,473 page views. His biography is available in 21 different languages on Wikipedia making him the 10,186th most popular politician.

Among politicians, Roger Williams ranks 10,135 out of 14,801. Before him are Karl, Duke of Schleswig-Holstein-Sonderburg-Glücksburg, Ahti Karjalainen, Lucius Aemilius Lepidus Paullus, Gisulf II of Friuli, Caspar Weinberger, and Edward Hyde, 1st Earl of Clarendon. After him are Jamshid bin Abdullah of Zanzibar, Şemsettin Günaltay, Tribhuvan of Nepal, Pacorus I, Kevin Rudd, and Alexander von Benckendorff.