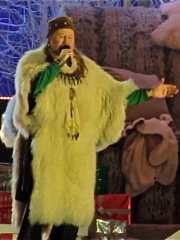 Fred Roger Pontare (born Roger Johansson; 17 October 1951) is a Swedish musician. He lives in Vingåker, Södermanland County. Pontare was born in Arjeplog Municipality, and is of Sami descent. Read more on Wikipedia

Since 2007, the English Wikipedia page of Roger Pontare has received more than 53,997 page views. His biography is available in 17 different languages on Wikipedia making him the 1,476th most popular singer.