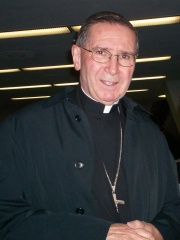 Roger Michael Cardinal Mahony KGCHS (born February 27, 1936) is an American cardinal and retired prelate of the Roman Catholic Church who served as Archbishop of Los Angeles from 1985 to 2011. Before his appointment as Los Angeles archbishop, he served as Auxiliary Bishop of Fresno from 1975 to 1980 and as Bishop of Stockton from 1980 to 1985. Born in the Hollywood district of Los Angeles and raised in the city's San Fernando Valley area, Mahony was ordained to the priesthood in the Diocese of Monterey-Fresno in 1962. Read more on Wikipedia

Since 2007, the English Wikipedia page of Roger Mahony has received more than 227,847 page views. His biography is available in 18 different languages on Wikipedia making him the 1,869th most popular religious figure.