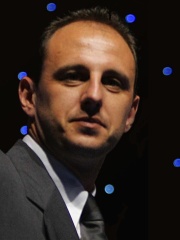 Rogério Mücke Ceni (Brazilian Portuguese: [ʁoˈʒɛɾiu ˈsẽni]; born 22 January 1973) is a Brazilian football manager and former player who is the current manager of São Paulo FC. He is considered one of the all-time greatest Brazilian goalkeepers and is recognised by the International Federation of Football History & Statistics as the goalkeeper to have scored the most goals in the history of football.Most of Ceni's vast professional career, which had spanned 25 years and 1257 professional club matches, was associated with São Paulo, with which he won 20 major titles, including three Brazilian Leagues, two Copa Libertadores and the 2005 FIFA Club World Cup. Read more on Wikipedia