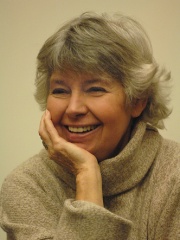 Robin Morgan (born January 29, 1941) is an American poet, writer, activist, journalist, lecturer and former child actor. Since the early 1960s, she has been a key radical feminist member of the American Women's Movement, and a leader in the international feminist movement. Her 1970 anthology Sisterhood Is Powerful has been widely credited with helping to start the contemporary feminist movement in the US, and was cited by the New York Public Library as "One of the 100 Most Influential Books of the 20th Century." She has written more than 20 books of poetry, fiction, and nonfiction, and is also known as the editor of Ms. magazine.During the 1960s, she participated in the civil rights and anti-Vietnam War movements; in the late 1960s, she was a founding member of radical feminist organizations such as New York Radical Women and W.I.T.C.H. Read more on Wikipedia