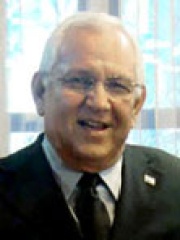 Roberto Micheletti Baín (born 13 August 1943) is a Honduran politician who served as the interim de facto president of Honduras from June 28, 2009 to January 27, 2010 as a result of the 2009 Honduran coup d'état. The Honduran military ousted the President, and the National Congress read a letter of resignation, which was refuted two minutes later by Zelaya in conversation with CNN en Español; days later, the coup-plotters claimed that the Supreme Court had ordered to forcefully detain President Manuel Zelaya because "he was violating the Honduran constitution"; Zelaya was exiled rather than arrested. Micheletti, constitutionally next in line for the presidency, was sworn in as president by the National Congress a few hours after Zelaya was sent into exile by the Honduran military. Read more on Wikipedia

Since 2007, the English Wikipedia page of Roberto Micheletti has received more than 87,429 page views. His biography is available in 28 different languages on Wikipedia making him the 9,844th most popular politician.