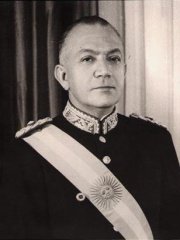 Roberto Marcelo Levingston Laborda (January 10, 1920 – June 17, 2015) was an Argentine Army general who was President of Argentina from June 18, 1970 to March 22, 1971, during the Revolución Argentina period in Argentine history.Levingston was born in San Luis Province, and graduated from the Colegio Militar de la Nación in 1941.His military expertise included intelligence and counterinsurgency, and he took the presidency of Argentina in a military coup that deposed Juan Carlos Onganía over his ineffective response to the Montoneros and other guerillas. His regime was marked by a protectionist economic policy that did little to overcome the inflation and recession that the country was undergoing at the time, and by the imposition of the death penalty against terrorists and kidnappers. Read more on Wikipedia

Since 2007, the English Wikipedia page of Roberto M. Levingston has received more than 54,326 page views. His biography is available in 21 different languages on Wikipedia making him the 10,141st most popular politician.