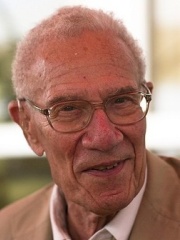 Robert Merton Solow, GCIH (; born August 23, 1924) is an American economist whose work on the theory of economic growth culminated in the exogenous growth model named after him. He is currently Emeritus Institute Professor of Economics at the Massachusetts Institute of Technology, where he has been a professor since 1949. He was awarded the John Bates Clark Medal in 1961, the Nobel Memorial Prize in Economic Sciences in 1987, and the Presidential Medal of Freedom in 2014. Read more on Wikipedia

Robert Solow is most famous for his work on economic growth. He is most well-known for his 1956 article, "A Contribution to the Theory of Economic Growth," in which he proposed that economic growth can be explained by technological progress.