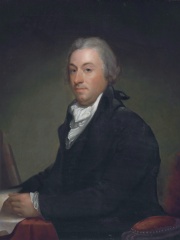 Robert Robert Livingston (November 27, 1746 (Old Style November 16) – February 26, 1813) was an American lawyer, politician, diplomat from New York, and a Founding Father of the United States. He was known as "The Chancellor", after the high New York state legal office he held for 25 years. He was a member of the Committee of Five that drafted the Declaration of Independence, along with Thomas Jefferson, Benjamin Franklin, John Adams, and Roger Sherman. Read more on Wikipedia

Since 2007, the English Wikipedia page of Robert R. Livingston has received more than 3,036 page views. His biography is available in 16 different languages on Wikipedia making him the 12,307th most popular politician.