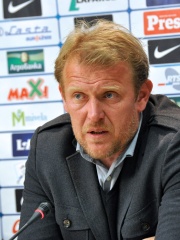 Robert Prosinečki (Croatian pronunciation: [rǒbert prosinětʃkiː]; born 12 January 1969) is a Croatian professional football manager and former football midfielder who is currently the manager of Süper Lig club Kayserispor. He is one of the few footballers to have played for both the Spanish rival clubs Real Madrid and FC Barcelona. After retiring from active football he worked as assistant manager of the Croatia national team between 2006 and 2010, before being appointed manager of Red Star Belgrade in December 2010. Read more on Wikipedia

Since 2007, the English Wikipedia page of Robert Prosinečki has received more than 769,142 page views. His biography is available in 42 different languages on Wikipedia making him the 75th most popular coach.