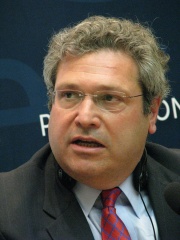 Robert Kagan (; born September 26, 1958) is an American neoconservative scholar and critic of U.S. foreign policy and a leading advocate of liberal interventionism.A co-founder of the neoconservative Project for the New American Century, he is a senior fellow at the Brookings Institution and a member of the Council on Foreign Relations. Kagan has been a foreign policy adviser to U.S. Republican presidential candidates as well as Democratic administrations via the Foreign Affairs Policy Board. He writes a monthly column on world affairs for The Washington Post. During the 2016 U.S. Read more on Wikipedia