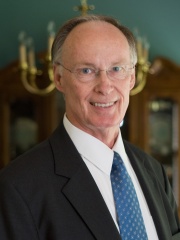 Robert Julian Bentley (born February 3, 1943) is an American former politician and physician who served as the 53rd Governor of Alabama from 2011 until 2017 upon his resignation after a political scandal and subsequent arrest. A member of the Republican Party, Bentley was elected governor in 2010 and re-elected in 2014. A sex scandal involving a political aide forced Bentley to resign from office on April 10, 2017. Born in Columbiana, Alabama, Bentley earned his M.D. Read more on Wikipedia

Since 2007, the English Wikipedia page of Robert J. Bentley has received more than 850,243 page views. His biography is available in 23 different languages on Wikipedia making him the 13,182nd most popular politician.