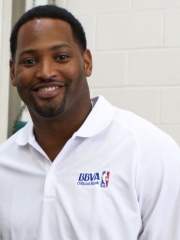 Robert Horry (; born August 25, 1970) is an American former professional basketball player and current sports commentator. He played 16 seasons in the National Basketball Association (NBA), winning seven championships, the most of any player not to have played on the 1960s Boston Celtics. He is one of only two players (the other being John Salley) to have won NBA championships with three teams: two with the Houston Rockets, three with the Los Angeles Lakers and two with the San Antonio Spurs. Read more on Wikipedia

Since 2007, the English Wikipedia page of Robert Horry has received more than 2,846,628 page views. His biography is available in 25 different languages on Wikipedia making him the 186th most popular basketball player.