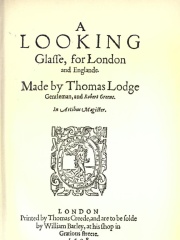 Robert Greene (1558–1592) was an English author popular in his day, and now best known for a posthumous pamphlet attributed to him, Greene's Groats-Worth of Witte, bought with a million of Repentance, widely believed to contain an attack on William Shakespeare. Robert Greene was a popular Elizabethan dramatist and pamphleteer known for his negative critiques of his colleagues. He is said to have been born in Norwich. He attended Cambridge, receiving a BA in 1580, and an M.A. Read more on Wikipedia

Since 2007, the English Wikipedia page of Robert Greene has received more than 42,053 page views. His biography is available in 22 different languages on Wikipedia making him the 3,573rd most popular writer.

Among people born in 1558, Robert Greene ranks 6. Before him are Maximilian III, Archduke of Austria, Michael the Brave, Hendrik Goltzius, Ishikawa Goemon, and Thomas Kyd. After him is Thomas Lodge. Among people deceased in 1592, Robert Greene ranks 17. Before him are William, Duke of Jülich-Cleves-Berg, William IV, Landgrave of Hesse-Kassel, William the Younger, Duke of Brunswick-Lüneburg, Pedro Sarmiento de Gamboa, Ogier Ghiselin de Busbecq, and John Casimir of the Palatinate-Simmern.