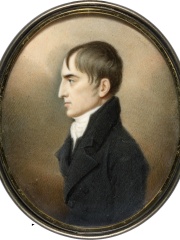 Robert Emmet (4 March 1778 – 20 September 1803) was an Irish Republican, and Irish nationalist patriot, orator and rebel leader. After leading an abortive rebellion against British rule in 1803 he was captured then tried and executed for high treason against the British king George III of Great Britain and Ireland.Emmet came from a wealthy Anglo-Irish Protestant ascendancy Church of Ireland family who sympathized with Irish Catholics and Protestant Dissenters, particularly in Ulster, such as the Presbyterians and their lack of representation in Parliament. The Emmet family also sympathized with the rebel colonists, or "patriots", in the American Revolution. Read more on Wikipedia

Since 2007, the English Wikipedia page of Robert Emmet has received more than 351,457 page views. His biography is available in 17 different languages on Wikipedia making him the 360th most popular social activist.

Among SOCIAL ACTIVISTS In Ireland