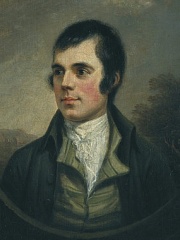 Robert Burns (25 January 1759 – 21 July 1796), also known familiarly as Rabbie Burns, was a Scottish poet and lyricist. He is widely regarded as the national poet of Scotland and is celebrated worldwide. He is the best known of the poets who have written in the Scots language, although much of his writing is in a "light Scots dialect" of English, accessible to an audience beyond Scotland. Read more on Wikipedia

Robert Burns is a Scottish poet, born in 1759. He is most famous for his poem "Auld Lang Syne" which is sung on New Year's Eve.

Among people born in 1759, Robert Burns ranks 6. Before him are Friedrich Schiller, Georges Danton, Joseph Fouché, Mary Wollstonecraft, and Maria Feodorovna. After him are Victor Emmanuel I of Sardinia, William Wilberforce, William Pitt the Younger, Clotilde of France, Hedvig Elisabeth Charlotte of Holstein-Gottorp, and Maximilian, Hereditary Prince of Saxony. Among people deceased in 1796, Robert Burns ranks 2. Before him is Catherine the Great. After him are Juliana Maria of Brunswick-Wolfenbüttel, Victor Amadeus III of Sardinia, James Macpherson, Princess Augusta Wilhelmine of Hesse-Darmstadt, Shahrokh Shah, Johann Daniel Titius, Charles of Saxony, Duke of Courland, Thomas Reid, Pyotr Rumyantsev, and Adolph Freiherr Knigge.