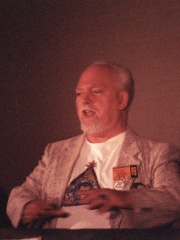 Robert Anton Wilson (born Robert Edward Wilson; January 18, 1932 – January 11, 2007) was an American author, futurist, and self-described agnostic mystic. Recognized within Discordianism as an Episkopos, pope and saint, Wilson helped publicize Discordianism through his writings and interviews.Wilson described his work as an "attempt to break down conditioned associations, to look at the world in a new way, with many models recognized as models or maps, and no one model elevated to the truth". Read more on Wikipedia

Among philosophers, Robert Anton Wilson ranks 782 out of 1,089. Before him are Bernard Williams, Kazimierz Twardowski, Michael Walzer, Louis Lavelle, Vazgen I, and Zacharias Rhetor. After him are Karl Vogt, Jean Starobinski, Maximus of Ephesus, Motoori Norinaga, David the Invincible, and Samuel Clarke.