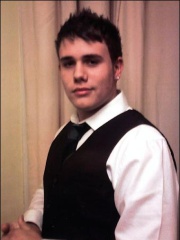 Robert Arthur Knox (21 August 1989 – 24 May 2008) was an English actor who portrayed the character of Marcus Belby in the film Harry Potter and the Half-Blood Prince, and had signed to appear in the planned film Harry Potter and the Deathly Hallows.Having studied at Beths Grammar School, Bexley, Knox began acting aged 11, gaining small roles in British television shows like The Bill, After You've Gone and Trust Me, I'm a Teenager. His first cinematic appearance was as an extra in King Arthur (2004). Knox died after being stabbed outside a bar in Sidcup, Southeast London, in May 2008, when he intervened in a fight to protect his brother. Read more on Wikipedia

Since 2007, the English Wikipedia page of Rob Knox has received more than 1,215,879 page views. His biography is available in 20 different languages on Wikipedia making him the 7,439th most popular actor.