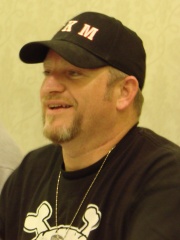 Brian Girard James (born May 20, 1969) is a retired American professional wrestler, currently signed to WWE as a producer.James is best known for his initial tenure with World Wrestling Federation (WWF, now WWE) as The Roadie from 1994 to 1995 and as "Road Dogg" Jesse James from 1996 to 2001. He is also known for his appearances with Total Nonstop Action Wrestling (TNA) as B.G. James from 2002 to 2009, and has also made appearances for several other promotions such as Smoky Mountain Wrestling, World Championship Wrestling, the United States Wrestling Association, the Catch Wrestling Association, and World Wrestling All-Stars (WWA). James has held numerous championships in a career spanning more than three decades. Read more on Wikipedia

Since 2007, the English Wikipedia page of Road Dogg has received more than 1,301,825 page views. His biography is available in 19 different languages on Wikipedia making him the 284th most popular wrestler.