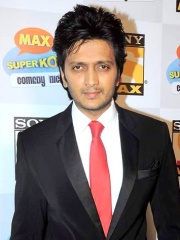 Riteish Vilasrao Deshmukh (born 17 December 1978) is an Indian film actor, architect, producer and entrepreneur . He is known for his work in Hindi and Marathi cinema. He is the son of former Chief Minister of Maharashtra late Vilasrao Deshmukh and Vaishali Deshmukh.After making his acting debut with the 2003 drama Tujhe Meri Kasam, Deshmukh gained praise for his performance in the 2004 comedy Masti. Read more on Wikipedia

Since 2007, the English Wikipedia page of Riteish Deshmukh has received more than 4,225,681 page views. His biography is available in 25 different languages on Wikipedia making him the 8,190th most popular actor.

Among actors, Riteish Deshmukh ranks 8,084 out of 8,832. Before him are Poonam Dhillon, Awkwafina, Misono, Becca Tobin, Brooke Nevin, and Brad Kavanagh. After him are Ennis Esmer, Keke Palmer, Niecy Nash, Dustin Milligan, Eve Myles, and Min.