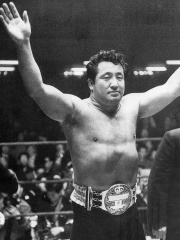 Mitsuhiro Momota (Japanese: 百田 光浩) (born Kim Sin-rak; Korean: 김신락; November 14, 1924 – December 15, 1963), better known as Rikidōzan (力道山), was a Korean Japanese professional wrestler known as The Father of Puroresu and one of the most influential men in professional wrestling history. Initially, he had moved from his native country Korea to Japan to become a sumo wrestler. He was credited with bringing the sport of professional wrestling to Japan at a time when the Japanese needed a local hero to emulate and was lauded as a national hero. Read more on Wikipedia

Since 2007, the English Wikipedia page of Rikidōzan has received more than 431,704 page views. His biography is available in 15 different languages on Wikipedia making him the 14th most popular wrestler.

Page views of Rikidōzans by language

Among wrestlers, Rikidōzan ranks 14 out of 562. Before him are John Cena, Bayram Şit, Dave Bautista, The Undertaker, Ric Flair, and El Santo. After him are Aleksandr Karelin, Bruno Sammartino, Ivan Poddubny, Aleksandr Medved, Triple H, and The Miz.