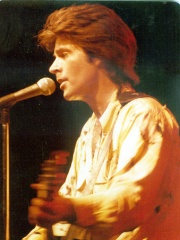 Eric Hilliard Nelson (May 8, 1940 – December 31, 1985), known professionally as Ricky Nelson until his 21st birthday when he officially dropped the "y" and simply became Rick Nelson, was an American rock & roll star, pop pioneer, musician, and singer-songwriter. From age eight he starred alongside his family in the radio and television series The Adventures of Ozzie and Harriet. In 1957 he began a long and successful career as a popular recording artist. Read more on Wikipedia

Since 2007, the English Wikipedia page of Ricky Nelson has received more than 4,769,373 page views. His biography is available in 32 different languages on Wikipedia making him the 439th most popular singer.

Among singers, Ricky Nelson ranks 441 out of 3,001. Before him are Solomiya Krushelnytska, Zaz, Mohammed Rafi, Marian Anderson, Neda Ukraden, and Perry Como. After him are Sertab Erener, Nellie Melba, Ruslana, Isabelle Aubret, LP, and Bobby Solo.