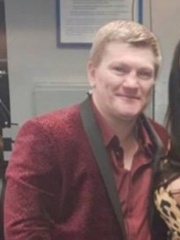 Richard John Hatton, (born 6 October 1978) is a British former professional boxer who competed between 1997 and 2012, and has since worked as a boxing promoter and trainer. During his boxing career he held multiple world championships at light-welterweight and one at welterweight. Hatton is ranked by BoxRec as the best British light-welterweight of all time, the third best in Europe, and eleventh best worldwide. Read more on Wikipedia

Since 2007, the English Wikipedia page of Ricky Hatton has received more than 2,207,229 page views. His biography is available in 16 different languages on Wikipedia making him the 134th most popular boxer.