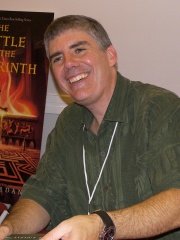 Richard Russell Riordan Junior (; born June 5, 1964) is an American author, best known for writing the Percy Jackson & the Olympians series. Riordan's books have been translated into forty-two languages and sold more than thirty million copies in the United States. 20th Century Fox adapted the first two books of his Percy Jackson series as part of a series of films, while a Disney+ adaptation is in production. Read more on Wikipedia

Among writers, Rick Riordan ranks 1,455 out of 5,755. Before him are Dorothy Parker, Christian Morgenstern, Allen Carr, Tom Wolfe, Sadriddin Ayni, and Ichiyō Higuchi. After him are César Vallejo, Jules Laforgue, Salvian, Fulcher of Chartres, J. G. Ballard, and Vasil Bykaŭ.