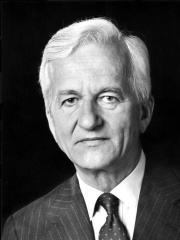 Richard Karl Freiherr von Weizsäcker (German: [ˈʁɪçaʁt fɔn ˈvaɪtszɛkɐ] (listen); 15 April 1920 – 31 January 2015) was a German politician (CDU), who served as President of Germany from 1984 to 1994 (of West Germany 1984–1990 and of the reunited Germany 1990–1994). Born into the Weizsäcker family, who were part of the German nobility, he took his first public offices in the Evangelical Church in Germany. A member of the CDU since 1954, Weizsäcker was elected as a member of parliament at the 1969 elections. Read more on Wikipedia

Richard von Weizsäcker is most famous for being the president of Germany from 1984 to 1994.

Among politicians, Richard von Weizsäcker ranks 1,820 out of 15,710. Before him are Leopold, Duke of Lorraine, John Frederick I, Elector of Saxony, Henry II of Castile, Edgar the Peaceful, Ferdinand I of Naples, and Charles VIII of Sweden. After him are Qa'a, Edward the Martyr, Li Keqiang, Ferdinand II of the Two Sicilies, Maria Anna of Savoy, and Frederick the Fair.